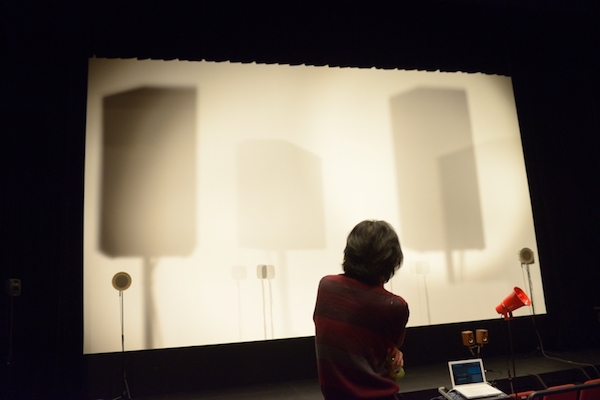 A document that chronicles “Cinema from Sound” from the very first work launched as part of the project, the 2014 live version of “Music as Film,” all the way up to the premiere Acousmonium screening of “Salome’s Daughter.” We see live performances in which the audience is assaulted on two sides—by the screen in front of them and the musicians behind them, Acousmonium screenings where the sound is made stereophonic through its distribution among speakers of a variety of sizes, and events using multilayered projection that abolishes the white screen to which cinema is usually privileged and replacing it with a scrim that allows light to pass through. We are treated to a parade of numerous experiments Shichiri made in the early stages of the project, in which he explored the limits of the medium of film, even as he deviated from its frameworks. In interweaving elements of both the lecture series “Within Films, After Films, Film Borders “ and of all the post-screening talks that accompanied the project, this explanatory work reveals his aims in doing so; however, these are by no means articulated clearly. Before long, the sound has detached from the images and become separate, and then the two are collaged. A playful work, even as it functions to document, that explores the mysteries of merging image and sound in different ways.