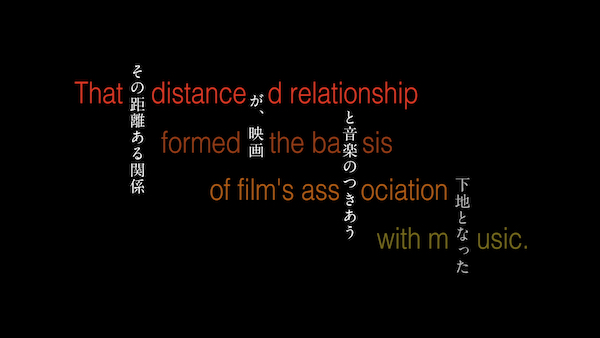 When did film and music first encounter one another? In the beginning, film had no voice. Even so, he must have heard the sounds that emanated as he watched. It was late 19th Century Paris that gave birth to both the medium of film and the play “Salome” by Oscar Wilde. In this work, the peculiar connection between the two is articulated through the telling of their stories simultaneously but separately, one in sound and one in images. In the soundtrack (audio), twelve people bombard us with the text of “Salome” in raging billows of songs, chanting, and storytelling, while the video tells the personified history of film dispassionately, in titles. The work is both metacinema that covers everything from early motion pictures to digital media, in addition to being a plaintive interlacing of the stories of a woman (Salome) seeking to possess a man (Jokanaan) with that of a man (film) seeking to possess a woman (music). The first cinematic work in a series based around the idea of “Cinema from Sound”. Before the film, a live screening with the same title was held.

Live performance of ”Music as film”

In 2016 an international version was created, overlayed with English language dialogue and featuring colorful English subtitles swirled throughout the entire film.