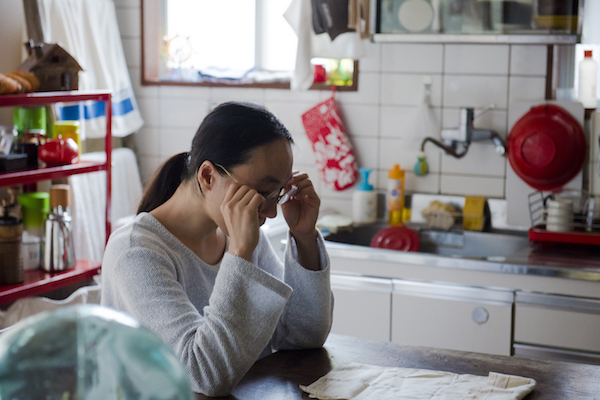 A woman talks about mother. Her words become a dance, and the story begins. An enigmatic note has been left on the table: “I’m going to the mountain.“ Who wrote it—mother then, or me now? The single ray of a flashlight roves through the darkness. The thundering roar of a falling tree lacerates the silence. Burning meadows, translucent horses, and beautiful mother in memory. A mysterious group, Wangel , does an uncanny dance, in gymnastic movements. While horses, horses, horses bound across snowy fields. These waves of images intersect with the woman ‘s unceasing monologue.
“Salome’s Daughter” is an original prose poem, a new rendition of the play “Salome,” that re-interprets the work as being about a mother, daughter, and absent father. The lengthy text was first recorded in a polyphonic recitation and structured as a work of musique concrète. This was then combined in editing with silent footage of the characters acting out the work solo. The second screened work in “Cinema from Sound,” and the most violently frenzied in the series.
Preceding the film, images absent of people were screened accompanied by a live performance of the soundtrack enabled through the use of an Acousmonium, an electronic music performance tool.